I must admit, the recent developments of smartphones have put out a tight competition for pocket cameras in terms of features and specs. Most smartphones these days have cameras that are equipped with auto and manual focus, optical zoom, and so much more.

But still, professionals and enthusiasts who prefer a dedicated camera that has changeable lenses feel the need for a compact pocket camera for work and casual everyday shooting and photography.

Seeing what we need, Canon has been coming up with compact cameras that are friendly to our pockets. Both size and in terms of budget. The latest addition to this series of pocket cameras is the new G7X III.

It hasn’t been too long since the thing hit the markets, and I just had to get my hands on this cool new toy as soon as it did. So, after using it for some time, I decided to tell you what I think about this amazing new tool in my Canon G7X III Review.

How is the Design and Build Quality?

Actually, let’s get into the “Color” first.

Because I feel like it. The Canon G7X Mark III comes in two different colors; black and silver. Each finish is coated with a black leatherette wrap.

It weighs around 10.7 ounces, and its dimensions are 2.4 by 4.1 by 1.6 inches (HWD). The compact build and surprisingly lightweight of the camera allowed me to slide it comfortably inside the pocket of my trousers and carry it around without noticing that it’s even there.

Another thing that caught my notice in a good way was the handgrip. Previous versions of Canon compact cameras like the G5X had a flat front which often slipped from my hand when I tried to get the camera out of my pocket in a hurry.

But the G7Xhas a firm grip that doesn’t slip even if my hands are sweaty. The mixture of metal with plastic and the leatherette cover plays a vital role in this case.

How Do the Controls Work?

Also, there is a control ring around the lens of the camera, which is by default set as the shutter or aperture control mode depending on the mode you’re using. 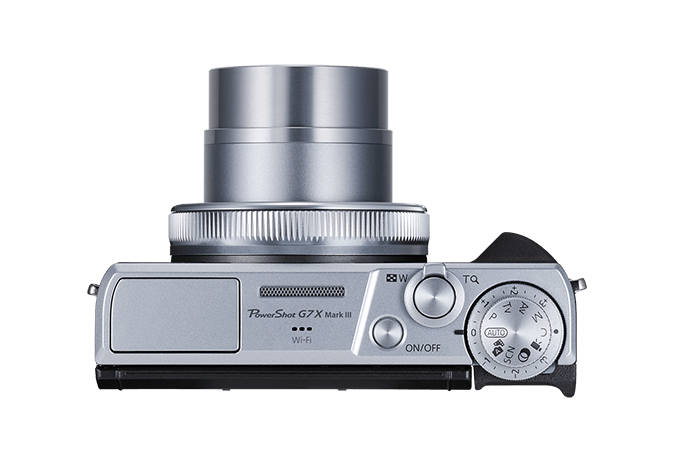 But the function can be reprogrammed to work as zoom control, ISO adjustment, or EV compensation knob. This puts a lot of control on the hardware of the camera which gives it a manual, sort of old-school feeling that I’m personally very fond of.

The only problem you might face while recording videos on this thing is that, there is no port to plug in an external mic or any other external equipment to it. Although it won’t be such a big issue if you’re using a wireless radio mic. But even for that, you’ll need a bracket to mount the mic into.

Working with the Display and Viewfinder

When I first got my hands on the camera, I was a bit taken aback seeing that there is no viewfinder. But soon I realized that Canon has made up for it by replacing the viewfinder with a tilting LCD touch-screen. 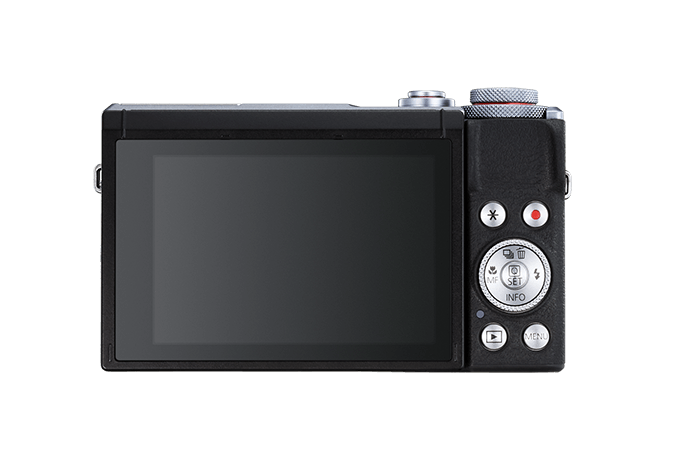 This not only saves the space and the hassle of having to use separate buttons to run various functions but also makes it easier to handle.

You can simply hold the camera in one hand and use the touch-screen panel with your thumb. Or, if you’re shooting a video or taking a still and decide to change the focus point halfway through, you can just reach out and change the focus to your desired point by tapping on it on the screen.

And if you’re a Vlogger, you’ll find the screen to be very helpful as it will show you the frame and focus of your videos while you’re shooting them. The screen tilts all the way forward; allowing you to compose your videos while recording, and make changes to them if necessary.

This will save you a lot of time and effort that you’d normally spend behind editing your videos.

Is the Lens any Good?

The lens on the G7 Mark III is truly worth talking about. The 1-inch class 20MP image sensor will deliver you with sharp details and almost visibly nil noise through ISO when you’re shooting in JPG format.

The sensor is definitely bigger than that of most point-and-shoot cameras and smartphones with its evidently larger zoom power.

Even if you change the ISO settings to 1600 or 3200, the details will soften to some extent, but the image clarity will remain the same. Unless you decide to intentionally blur the images a bit, in which case you’d have to push the sensor as high as ISO 6400 or 12800, only then you’ll notice a little blur.

But you probably wouldn’t like the image quality after doing that.

If you’re a more advanced level photographer, you can try shooting your images raw, which will capture them with all the noise but also will not wipe out intricate details from them that the camera’s noise reduction technology normally does.

This will, on one hand, leave the entire task of erasing the noise from the photos manually through editing software upon you, but on the other, it will give you more room to work on delicate adjustments on the photos like the color and the exposure of them.

The lens design of the G7X is pretty much the same as that of its predecessor G5X or even Sony RX100 VA. It uses the same 24-100mm f/1.8-2.8 zoom that was featured in the older version of the camera.

Although the zoom on this delivers a bit more detail than that of the Sony’s, you’ll hardly ever notice it if you’re using it simply for Facebook or Instagram uploads.

Canon has made huge improvements to its sensors compared to their older generations, and one of the biggest proofs of that are the sensors of the G7X III. You’ll notice this big time if you’re using it in autofocus mode.

Autofocus is used for taking rapid snaps of moments and things that are in a lot of speed and there isn’t enough time for the photographer to fix the focus. 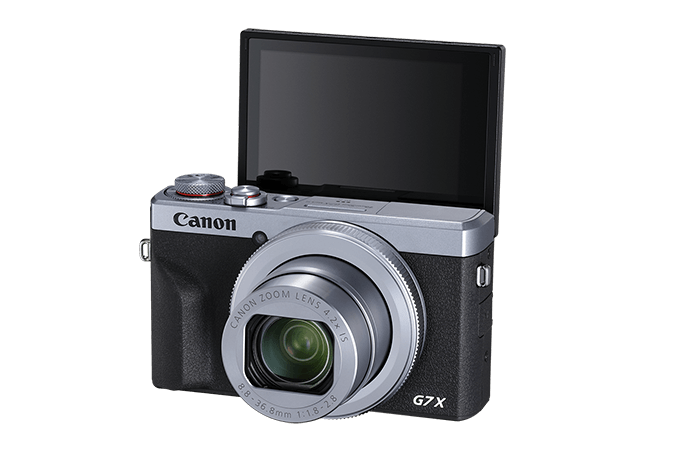 Whether it’s RAW, JPG or JPEG, the Mark III shoots in 30fps and can even take shots in 20fps, all in a fixed focus regardless of what format you choose to shoot in.

The only problem is though, that the face detection and subject tracking don’t work that well when you’re shooting on burst mode. But if you’re taking single shots, you can give enough attention to each detail and take full advantage of the face detection feature to track down subjects from any angle you want.

If you want both speed and focus, the camera will slow down to an 8fps to focus on every shot.

If there is adequate light, the G7X can lock the focus very quickly on its target in less than 0.5 seconds. When it’s dark, the focus assist light will kick in which will give you focus but at the cost of speed; which will then be at 0.3 seconds.

How Good is the Connectivity?

The G7X Mark III is packed with all the latest connectivity technologies you can expect from a modern-day compact camera. It’s got a micro HDMI, a USB-C port, and a 3.5 mm jack for connectivity.

It also supports all sorts of memory sticks, for example, SD, SDHC, and even HDXC. It also supports in-camera charging, which frees you of all the hassle of taking the battery out every time you need to charge it, and then again remembering to put it back into the camera before heading out.

Apart from hardware connectivity, the camera also supports wireless connectivity like Wi-Fi and Bluetooth. If you like to edit and upload your photos and videos with your smartphone on the go, you can simply download the Canon Camera Connect app

Then, transfer your shots to your phone using the app. It’s available for free download in both Google Play Store and Apple App Store.

Another cool thing you can do with this camera is, you can stream your videos live directly to YouTube from the camera itself! You just need an Image Gateway and a YouTube account.

It takes a little time for the camera to set it up, but once it passes the password authorization step, you’ll have direct access to your YouTube page from the camera for direct live streaming.

The Battery Life is a Delight

Although the time and trouble saving feature of the camera seems like a blessing to many photographers and vloggers who are always on the go, it also comes with a little problem called; power adapters. It takes a bit of work to find out which type of power adaptor the camera works with.

After many failed attempts with various adapters, I finally had success connecting the camera with my MacBook Pro power adapter. You may find other portable batteries that are also compatible with it.

There is an external charger provided by the manufacturer, but I’d recommend charging it internally and also carrying an extra battery or a power pack for a longer trip because the CIPA rating of this camera is just 235 images.

After using it for some time and getting accustomed to some of its unique features and traits, here are some things that I like and don’t like about the camera.

Things That Need Some Work

Should You Buy One?

In a single word instead of a long Canon G7X Mark III review?

It’s a good camera packed with good features. What impressed me the most is that, Canon did not only cherry pick new features and technologies to add to this camera, but also paid attention to improving some issues that its previous generations had.

This user-generated approach towards remodeling and renovating their designs is what makes Canon one of the favorite brands of professional photographers as well as enthusiasts all over the world.

Whether you’re a pro or a wannabe photographer, the Canon G7X Mark III is a camera that’s definitely worth a shot for you.