Shotgun mics are a blessing for every videographer. They’re handy, portable, easily compatible with your camera, and can record clear audio while cutting out any background noise that might be in your video.

There are a lot of brands that make shotgun mics, and the leading ones also vary in their approaches towards their areas of concentration. Some brands focus on the clarity of the sound, while others are more determined to catch every detail and magnify it.

Whatever type you prefer, buying a shotgun mic for the first time can get a little confusing. With so many varieties to choose from, it gets pretty overwhelming. Also, sometimes beginners don’t even know for sure what they want.

So, in this blog, I’ll try to take you on a detour down the microphone store and help you choose the best shotgun mic for you, depending on your requirements. I’ll tell you what aspects you need to look out for when choosing a shotgun mic, and which mics provide the best service for those aspects.

Let’s start, shall we?

Shotgun mics are a separate category of microphones that are classified into several sub-categories based on their functionality, how they operate, size, and some other aspects. Here are some of the classifications.

Not every mic is considered a ‘shotgun’ mic, even though they’re used with cameras just like shotgun mics. A good example of this phenomenon is lavalier or collar mics. These tiny devices are often clipped onto the apparel of the subject in the video.

Lavalier mics are usually dynamic mics that use a metal coil to mimic the sound waves once they hit the diaphragm and create electrical charge that captures the sound, recording the audio.

Just so you know, sound waves need to have the frequency of a certain degree for them to vibrate the coil inside the diaphragm of a dynamic mic.

Lavalier mics are discreet, but they do their job pretty well by recording audio with or without the help of audio recorder. Although it is a good idea to use a separate audio recorder for better rendering, but lavalier mics can also be plugged directly into your camera’s or even cellphone’s 3.5mm mount.

Shotgun mics, on the other hand, usually require a separate mount or hot shoe that you use for connecting it with the camera. Or, you can even connect it to a boom and record clear audio from a distance without the mic getting into the frame of the video.

Shotgun mics are usually condenser microphones. Meaning that they are capable of catching much quieter sounds and ambient sounds with high accuracy.

They have a diaphragm just like any other type of microphone, but the diaphragm is usually made of very thin metal and they also have an additional plate of metal called a backplate.

Both the plates create a static charge between them when electricity is applied to them. This electrical current is created every time a sound wave hits the diaphragm causing it to vibrate.

These are possibly the simplest of all shotgun mics. They can be mounted on most DSLR and mirrorless cameras with their built-in shoe mount, and often have a 3.5mm connector that plug directly into most cameras and mobile devices. Some even have settings for adjusting the dB level.

A good example of this type of shotgun mics is the Rode VideoMic. It has a low frequency cut off that’s designated by a slanted line, as well as -10, 0, and +20 dB level settings. 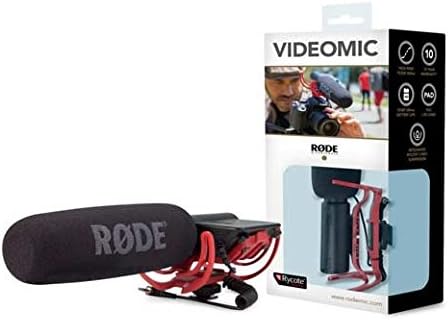 This on-camera directional microphone is versatile enough to be used in any situation. Although the distance of the subject may be limited to the camera you’re using.

But if you ask me, then I’d say that the 3.5mm input is much less trustworthy than an XLR cable It’s also dangerous to rely on your camera for adjusting the audio levels.

A much safer solution to this is using a shotgun mic with an audio recorder such as the Zoom H4N which will allow you to take necessary steps to avoid peaking.

The length of the mic does impact the directionality of your shotgun mic to a great deal, which in return may affect the situations where you choose to use your microphone. The good thing about short shotgun mics is that they’re extremely portable and handy.

They can be easily carried around and mounted on cameras. They’re also typically more durable than other types of shotgun mics.

The main difference that sets short shotgun mics apart from on-camera shotgun mics is that they tend to have an XLR input, and require phantom power from and audio mixer. I’ll explain what it means later.

Medium sized shotgun mics are mostly used in TV and film with a boom for better voice pickups. The benefit of using a longer shotgun mic is getting a more directional pickup pattern along with the fact that it rejects any off-axis sound.

Medium-sized shotgun mics can be used from as far as six feet away and still be able to and still omit out all the background noise.

Medium shotgun mics are the best choice for you if you’re booming and recording. Since they are directional, they’re very easy to use and offer some extra freedom in terms of placement.

Long shotgun mics have a strictly dedicated pickup pattern and are best suited for outdoor shooting where there is a lot of action.

In such cases, long shotgun mics come in handy as they can capture sounds from as far as nine feet away, given that there isn’t too much background noise.

This is made possible because of the tight pickup pattern. The boom operator can aim the microphone directly at the subject and catch a clear sound even from a great distance.

In fact, doing so is often necessary because otherwise the changes in microphone angle caused by the movements of the subject can cause a noticeable amount of drop off in the audio output.

But despite having all the benefits for outdoor recording, long shotgun mics do have their own set of shortcomings with reverberation indoors because of their tight frequency range and high sensitivity.

In some cases, reverb can be more annoying than an echo. Because an echo is the sound that’s been directly reflected back to the source, whereas a reverb is the remainder of that sound wave that keeps moving around inside the room much after the source has stopped making the sound.

This is an issue that many long shotgun mic users have to face when recording in a closed environment. Because in rooms or environments that are surrounded by walls, the on/off-axis sounds are quite similar and omnipresent which causes sensitive shotgun mics to pick them up.

The best way to avoid this is by monitoring your audio and being careful about hard surfaces and echoes. Then you can record even with a long shotgun mic in a closed environment.

The term ‘phantom’ power may sound a bit confusing to those who are new to shotgun mics, or mics in general. But it’s no rocket science. You see, when a microphone has an internal battery or a power source, it’s a battery powered mic.

However, if it doesn’t and requires an external power source to work, then we call it a ‘phantom’ powered mic.

The difference? Well, when a mic is battery powered, it’d continue to work for a longer hours than phantom powered ones. If you work outdoors for long hours and need a long battery performance, it’s always a better idea to choose a mic that has an in-built battery.

Apart from a longer battery life, not having to carry an external power source will also add to your mic’s and your entire setup’s portability.

Which Length Should You Use?

This solely depends on what, how, and where you’ll be using your mic. While a longer interference tube will cut out most of the-axis noise, it will also cause a lot of reverb in a closed environment due to its high sensitivity and directionality.

A shorter tube, on the other hand, has less directionality while still providing great rejection of off-axis noise, but it has issues with connectivity.

A medium sized shotgun mic, however, seems to provide the best of both worlds, with great directionality, excellent sound sensitivity, portability, and connectivity.  The only problem with them is that since they don’t have that long a range, they often fail to perform from a distance.

The choice is up to you and your preferences. Most shotgun mics are considerably good at capturing on-axis sounds. But even a highly directional mic can admit some degree of off-axis sound at particular frequencies. Usually this happens when the comb-filtering artifacts such as a hardwood floor.

The key is to look for a mic that has a low self-noise and high sensitivity along with natural on-axis sound and equally proportioned off-axis rejection. Once you’ve ensured his, you can have a great audio with even an ordinary shotgun mic without much post-production sound editing.

Let’s Put the Curtains Down!

Just before you decide to buy a shotgun mic, thinking that it’s the shotgun mic for your camera, just remember to double-check some basic factors such as whether it’s compatible with your camera or not (most of them are, but there can be exceptions).

It all depends on whether it’s worth the price you’re paying for it, and last but not the least, whether you need a shotgun mic or not.

Yes, this is one of the key factors you should consider before a shotgun mic. I’ll explain why.

Well, if you can only afford one boom mic and most of your shootings take place in noisy environments, then a shotgun mic may be the best choice for you.

But otherwise, if you do a lot of indoor shootings such as interviews in quiet rooms and you can only afford one mic, then you should perhaps go for a super cardioid.

These mics are almost as directional as shotgun mics but with a generally superior sound quality.

Although taking a good look at the depth of the sound produced by a super cardioid mic will require another write-up. But for now, I’d say, whichever mic you choose, always be sure that it’s dedicatedly designed for the purpose you’ll be using it for. That goes for shotgun mics and any other kind of mics.

Prices of the products reviewed in this site may subject to change anytime. Keep in mind that we may receive commissions when you click our links and make purchases. However, this does not impact our reviews and comparisons. We try our best to keep things fair and balanced, in order to help you make the best choice for you. Click here to learn more.